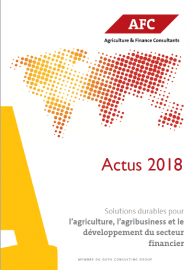 In Moldova, a country which has so much potential for modern fruit production, the 4-year project facilitating horticultural investments has now come to an end. AFC helped rural entrepreneurs and public institutions to access a European Investment Bank (EIB) credit line, of EUR 120 million, dedicated to horticultural investments. The EIB is one of the EU’s key institutions for activating support for its Eastern neighbours. The EIB credit line “Fruit Garden of Moldova” is open to all SMEs operating in fruit, grape, nut and vegetable production as well as wine-making and fruit processing. It became available in late 2016 and will be available until 2023. In addition to facilitating investment financing, AFC also exposed entrepreneurs, who access investment loans, to innovative technologies that help to meet market requirements, reduce production costs and improve the environmental footprint of fruit and wine production. Finally, AFC coordinated a communication campaign. It aimed at informing rural Moldovan citizens about the EU’s and EIB’s SME support and how this support can be tapped to create a future for rural enterprises which is sustainable and provides prospects for young people.

The Food Technology Department of the Technical University of Moldova benefited from a EUR 2 million public investment, financed by the EIB Fruit-Garden-of-Moldova credit line.

In order to ease access to finance to rural SMEs, some of which had never enjoyed formal investment financing before, AFC chose to set up a platform of cooperating and competing Business Development Services (BDS). Ten of these BDS were included in the programme. The BDS staff was trained and the companies were supported in marketing their services. AFC assured compliance with certain quality standards when BDS assisted rural producers to formalise their businesses, develop investment strategies, decide on suitable financing schemes, apply for loans, grants and subsidies and assist in bank negotiations. At the end of the project, the ten BDS accomplished 220 successful investment projects worth over EUR 70 million, of which EUR 34.3 million were financed from the EIB credit line. The average size of these investment projects was just over 300,000 EUR of which about half was financed through EIB supported loans. This work was coached by the AFC Consultants Igor Gorashov and Radu Voicu.

In addition, twenty-four experts, led by Team Leader Christoph Arndt, supported SMEs with different technological aspects linked to future-oriented investments. Their input was backed by seven study tours for selected entrepreneurs to various European countries. Topics included modern orchard establishment, intensive walnut, peach and plum production, certified-organic fruit production, investments into green shelterbelts and commercial compost-making, photovoltaic for cooling and pumping as well as wastewater treatment for winemaking and fruit processing. This work also supported several government initiatives: Moldova’s organic sector and achievements in organic horticulture were portrayed and the development of the Wine Sector Strategy and the National Irrigation Strategy were supported by contributing lead experts. Selected college course curricula were evaluated with regards to skills training and acquisition of competencies, and the Minister of Agriculture was supported to reach an informed decision regarding investments for a new wholesale market in Chisinau.

The Moldovan potato company Europlant increased its potato sorting and packing capacity with the help of an investment financed by the EIB Fruit-Garden-of-Moldova credit line.

Coordinated by AFC Consultant Sorina Dontu-Sariterzi, we also assisted the government with regards to the planning of public investments in the horticultural sector. EUR 12 million were made available by EIB for such investments. Seven agricultural colleges, two universities and one research institute received consultancy support. Their management and teaching staff also participated in study tours and internships.

Finally, the Communication Campaign, led by AFC Consultant Andrei Lozan, produced several videos for TV and social media. In an “Earned Media” component, local journalists from all major media outlets were exposed to the work of EIB. Billboards were placed in 15 rural towns of Moldova and three family events with the renowned Moldovan Vali Boghean band attracted more than 5,000 rural citizens.